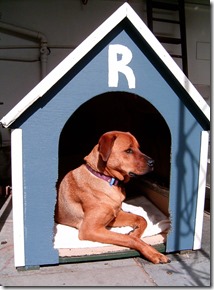 Of all the varied decisions we’ve had to make of late, we also had to consider whether to allow our first tenants to keep pets. Queue the cat lady.

By way of a preface to this post, we’ve always been “dog people”, had pets in the properties we’ve tenanted, and keep a dog and a cat in our own home—so we know all about animals. The dog in the photo is Riley. She's a ridgeback cross Rottweiler, around ten years old now (the photo was taken when she was younger). We also have a cat, who thinks he's a dog—and he's almost as big, named Ted. This crux of this post is our personal story about how we acquired Riley without permission while renting and our experience as pet owners (in case you’re not). I discuss some other considerations further down.

Ten or twelve years ago, we were living in in Adelaide near the university where we both studied. We found a house through the university's accommodation board after landing in Adelaide from Perth, days after I emigrated to Australia (a sordid tale, those first few weeks in Adelaide).

The landlord, Grant, worked next door as a steel fabricator and the house was ancient—or felt that way to us. Think green and yellow motif in the kitchen, gold threadbare carpets, a toilet in the sagging rear addition that was so cold on a winter’s night you might as well have been in an outdoor dunny, and ceilings that stretched to infinity. Our view from the front veranda was an old Colourbond fence across the street, what I would come to call an "ugly tree" on the verge, and Grant's crane through the twisted chain link fence separating the house from his factory. Grant started early—7am at the latest—and steel deliveries would often arrive around that time with a flatbed truck reversing down his drive which ran alongside the boundary of the rental property—and the master bedroom—with only inches to spare.

The house was close to the university and shops, it was clean, and it served us well given the affordable weekly rental of $125. Despite the occasional late night and weekend, Grant was a good neighbour and it was convenient having our landlord next door when it came time to pay the rent. Upon meeting Grant, we told him we had an old cat to deal with but, to quote me, "she'd be dead soon", and he was okay with that.

We spent four years in Adelaide, in the same rental. I think our rent increased once by five or ten dollars—a very good thing too as we had no money to our name (I was studying as an international student and we simply had nothing behind us despite menial part-time jobs, a meagre Centrelink allowance, and a simple existence).

At the start of our last year in Adelaide we woke up one overcast Saturday morning and started talking about dogs. We'd both had dogs we loved growing up. The wife said, hypothetically, she'd really like a Ridgeback. I said I'd really like a Rottweiler. We decided to drive down to the RSPCA that morning "just to look." We came home with 10 week-old Riley: a laughable sack of brown, wrinkly skin and a Ridgeback-Rottweiler cross.

Sunday we spent playing with Riley and thinking through how we might explain this situation to Grant. We thought he may not be too keen on the idea but we knew he had a family dog of his own. The rent was due on Monday so we had to go over anyway and he would have seen Riley in the garden if we weren't upfront things. We took Riley with us in the hope of persuading our landlord with puppy cuteness. Of course she was happy as any puppy can be be out for a walk, not knowing how much trouble her new parents might be in.

Grant met us at the roller door of his shed. The sun typically came up behind the shed and, walking up the workshop’s driveway it was often impossible to see what was going on inside, through the deep shadows beyond the door.

As we approached and my eyes adjusted to the dimness I saw an inquisitive smile on Grant's face and a raised eyebrow. He asked us what we'd done as we both cringed slightly and avoided eye contact.

Grant told us she'd dig holes in the grass and I promised him we'd look after the place. By this point he'd bent over to scratch her ears. All the necessary exchanges, of course—there was really no negotiation required and Grant's smile said it all.

And so we had a dog. The surprise was sprung upon our landlord but at least he was on board. The puppy dug holes every so often and I dutifully filled them in. She peed and pooped on the kitchen floor, where we left her the first few days when we had to go off to uni; when we arrived home, we washed the tired lino floor after collecting the mess and the freshly shredded newspaper we’d left down. She ate our phone once, while in that kitchen. She pulled laundry from the clothesline, once outside more regularly, and we arrived home one afternoon to find wifey’s unmentionables strewn across the front lawn. Thankfully she was quiet about it all and never barked much.

Grant would park his ute in a little garage at the corner of the factory lot and open the side gate first most mornings. As Riley slept outside in Adelaide, she'd come to greet him through the chain link fence every morning, sauntering sheepishly past our corner bedroom window to say hello. Or so we thought: we peeked at the two of them one morning from behind the curtain and realised Grant was actually sneaking Riley treats.

When we left Adelaide to move to Perth, Grant asked for a picture of Riley. Obviously we lucked out as Grant could have told us to get rid of the dog or cancelled the lease when we brought her home.

We still have Riley today. She still digs holes and sheds fur and tracks mud and sand into the house. She’s older now and drools brown slobber through her old teeth. As work progressed on our first investment property we discussed whether it would be wise to allow prospective tenants to have pets. The house and all of its fittings, including the carpets and gardens, are brand new. We can’t ask tenants for a pet bond in Queensland but I suppose we could charge a premium rent if the market would tolerate it (Open Wealth’s rental guarantee might not, however). Allowing pets has the potential to widen the market of applicants and might also help install a long-term tenant at that.

We've read horror stories about the smell that lingered even after the carpets were pulled out. We know from first hand experience dogs and cats have oils on their fur that gets left behind on every doorway and corner they rub past. Fur gets into everything. Cats have claws that pick at carpets. Dogs dig holes. And they all get poop and occasionally vomit on floor coverings and walls. They sometimes bleed (another story). They sometimes claw at doors. They sometimes chew wood. They sometimes dig up new gardens. They bark (and meow). Even a fish tank might leak and a snake might eat the kids. Is any premium really worth it? It would likely be hard work to evict a cat lady and insurance might or not might not cover some of these problems.

We've loved our pets. They cause us no end of heartache at times but they're good value nonetheless and the kids love them. I don't think a new house is the best place for tenants with pets—from my perspective as a landlord, anyway. Maybe in ten years when the place has been bumped through by several shorter term tenants and is due for a fresh coat of paint and new carpets.

Nonetheless, our property manager at Century 21, Kerry West, indicated most of the applicants looking for a 4x2 house in the area have pets (think family: mum, dad, and two or three kids plus cat or dog or both). Kerry further suggested a family without a pet on move-in day might seek to acquire a pet later on, which would likely be a juvenile animal instead the mature animal(s) we might get upfront. All valid points we hadn’t considered.

And so we left the Pets Allowed box ticked on the appointment form and agreed to wait and see what happens. In the end, the first application through (which we accepted) is from a trio of roommates with no pets and the lease formally stipulates no pets.

If the tenants come to us in time asking to have a pet (or having acquired one) I can’t say I’ll be as sympathetic as Grant was with us but I can’t say that I’d say no either. At the very least there would the cost of replacing the tenants if they chose to leave in order to find a more accommodating rental. We certainly understand the benefits of having pets in our lives and it would be hard to begrudge someone else that luxury.