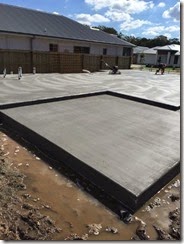 Well that happened quickly! We have a slab (and a corresponding invoice for the base stage of around $22k). It suddenly feels like progress is moving quickly—at long last. Looking back, I see the approvals came through around mid-April so it’s not that speedy but I’m happy given the weather.

I should note I’ve been very impressed with our Mortgage Broker this time around. As I’ve no doubt mentioned previously, we used Mortgage Choice when we bought our PPOR (land and build). They were involved then to the finance approval stage but I don’t recall interacting with them beyond that point for progress payments on the build.

This time, we received a copy of the builder’s invoice for the base stage from Open Wealth and that very same day, Mortgage Choice sent me the same invoice to approve for payment by the bank. It’s only a little thing but it’s nice knowing the broker is still involved to grease the wheels between us, the bank—and Open Wealth too for that matter. In theory, this means this invoice and future invoices should get paid on time and help us avoid any penalties for late payment.

As we’ve not yet seen the block and live on the other side of the country from Brisbane, it occurred to me it might be time to enquire to Open Wealth about how I go about approving payment for $20k of works when I haven’t seen the slab and have received no other reports as to quality, correctness, etc. Admittedly I should have asked this question before committing to the build with Open Wealth but I wasn’t thinking along those lines at that point.

I was happy with the answer from our Open Wealth Client Liaison Manager, however, and it turns out there are several inspections which occur throughout and after the build. She emailed me this helpful response:

“The builder employs a Certifier who conducts multiple inspections. The Certifier is governed by the council and legislation.

Here is a list of the certifier and other inspections:

When we built in Perth in 2007 through a “project builder” we had only the word of the site manager to go on (at practical completion) and we commissioned an independent inspection at a cost of $500. I’m sure the bank had a look in some shape or form but this was never made evident to us. Despite living in this house for nearly eight years, we’re still dealing with issues from the build (long story for another day…). Perhaps it’s all smoke and mirrors but from what I’ve seen so far the level of rigour in Queensland in 2015 seems greater than that in WA in 2007/08.